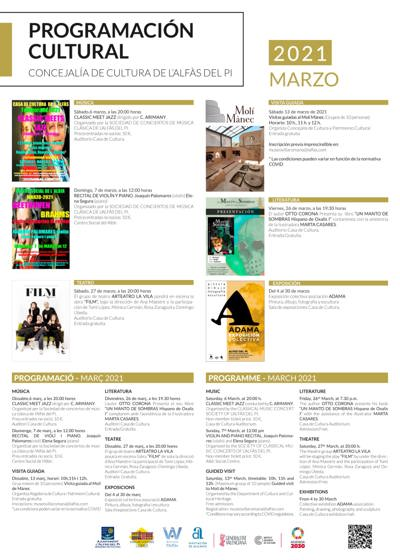 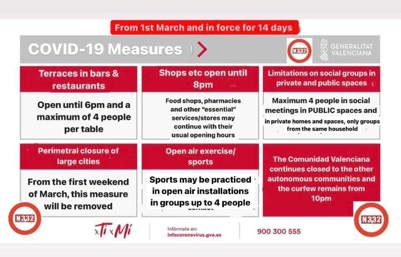 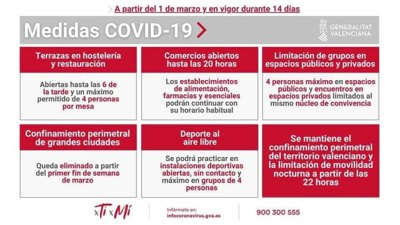 The curve of infections is descending and there are 30% less hospitalizations but the pressure on the intensive care ward is still high. Presumebly this will take of aswell when the number of infections keeps on dropping.

I would like to share something really beautiful with you: "The sculpture garden Klein Schreuder in l'Alfàs del Pi"

The video was made in Spanish for 8Marina TV, a local TV station.
https://fb.watch/3qlxTPMjhs/

Los Sres Klein Schreuder are inviting us for a visit as soon as the situation allows us to go.

From Monday 1 February:
😷Facemasks will be compulsary:

✅for children from 6 years on, on the street, in open areas, inside public áreas or indoor spaces open to the public.

✅while doing sport or any physical activity in urban areas aswell as in green zones between 10 am and 7 pm.

✅Walking, hiking or doing work outs on the beach are allowed, wearing a facemask.

Facemasks are not compulsary:
- doing sport out of the urban centre
- children and youngsters spending free time with family members from their household.
- people with breathing problems due to their illness or disabled people having funcional problems wearing a facemask.

----------------------------------------------------------
SUMMARY FROM MONTHLY MEETING ASSOCIATIONS
27 JANUARY AT 1 PM BY ZOOM
• As you all know, we are living some difficult times. The Valencian Community has got one
of the highest infection rates of Spain. Before Christmas it seemed that Covid-19 was not
affecting our area too much. After Christmas the situation changed and Ximo Puig, the
Valencian president had to announce a range of new measures, due to the pressure that
health workers were/are suffering because of the high number of Covid cases.
These measures are:
✅ Private gatherings at home between people who do not usually live together are not
allowed, except for carers and those who live alone.
Exeption: volunteers are still allowed to attend youngster, eldery or vulnarable people as
they used toddo. Singles can meet with 1 family or another single but only one and always
the same people.
-✅ Meetings in public spaces are only allowed between 2 people from different households.
-✅ Travelling in and out the Valencian Community is only allowed for "justified reasons".
-✅ Towns with a population over 50.000 inhabitants will be perimetral confined at
weekends, from Friday at 15 h untill Monday at 8h, and bankholidays. ( Alicante, Benidorm,
Elche, Torrevieja, …) This means that we won't be able to go shopping to Alicante or go for
a stroll in Benidorm during this time.
• Schools remain open unless there would be an uncontrolled transmission in the local area; in
which case the schools may be closed down
• Statistics say we have got 243 cases in l'Alfàs del Pi, 238 in La Nucia and Benidorm 1028
cases yesterday. 41 people lost their lives in the province of Alicante.
• Vaccination Campaign has started as you all know. We are now in Phase 1 where health
workers, doctors and people from eldery homes are vaccinated.
Yesterday 1.291.216 were vaccinated and 123.697 recieved already their 2nd dose.
• Private health workers who were due to have their vaccination next week, might have to
wait because there seem to be some problems with the Moderna vaccins supply, according
to the newspaper.
• The next group will be the people older than 80 years old. It is not known when this will be,
everything will depend on the supply.
• The Valencian Government has confirmed it will recieve a weekly supply from 30.000
Pfizer vaccines of which 10.000 are for Alicante. There were some problems at the
manufactuering plant that are resolved now they are able to increase the production.
• Many people have aksed me when they were going to get their vaccination. Some of them
are non residents. Residents with a SIP card will be contacted by the health centre. In the
case of non residents, I would recommend to take the vaccination in your home country. In
case we would have more information for the non residents before your appointment at
home, we will let you know how to proceed.
• Cultural Agenda for February:
* Painting exhibition, Casa de Cultura by Fredy Bustos, Columbian Norwegian Painter
*Sábado 20, Casa de Cultura, concierto sociedad de música clásica (20h)
*Domingo 21, mismo concierto en el Centro Social del Albir. (12h)
*Sábado 27, visita guiada Molí de Mànec
*Sábado 27, teatro Film (20h)
*Solidary cinema is cancelled untill further notice
As soon as I get more information, it will be send to you.
• Blood donations on 4 and 18 February in Casa de Cultura from 17 untill 20.30 h

‼️Due to the high levels of  infectións, the Valencian Goverment has announced

These changes will be published tomorow in the official bulletin DOGV:

-✅ Private gatherings at home between people who do not usually live together are not allowed, except for carers and those who live alone.
- ✅Meetings in public spaces are only allowed between 2 people from different households.
- ✅Travelling in and out the Valencian Community is only allowed for "justified reasons".
- ✅Towns with a population over 50.000 inhabitants will be perimetral confined at weekends, from Friday at 15 h untill Monday at 8h, and bankholidays. ( Alicante, Benidorm, Elche, Torrevieja, ...)
#lAlfàsInternacional
#StayHome

We all knew that the cases were rising, also in l'Alfàs del Pi. Today President Puig has announced a range of new measures, due to the pressure health workers are suffering because of the high number of Covid cases.

The basic measures will take effect from 00.00 on Thursday 21 January untill 31 January, are as follows;

- All bars and restaurants will be closed from 21 January for 14 days, except for takeaway / delivery, hotel restaurants and workplace / hospital canteens, which will still be permitted

- Businesses such as shops must close by 18.00, except essential food, chemists etc..

- Hotels may be allowed to remain open with new conditions

- All sports centres will be closed, except for professional athletes. Including gyms.

- The maximum number of people in social or family gatherings is kept at 6.

- Limitation of entry and exit from the Valencian Community.

The Valencian community has request from the national government a curfew time of 20.00 instead of the current 22.00 but this is not confirmed.
The 29 municipalities affected by special orders will be free of them, but they will have to follow the same rules.

We will keep you updated with any further news.